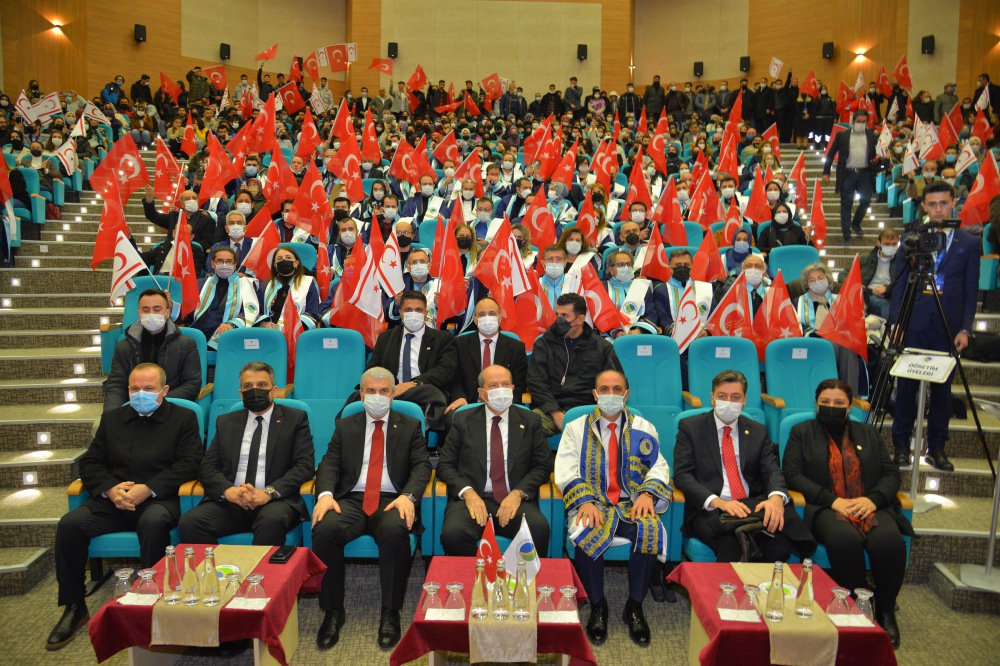 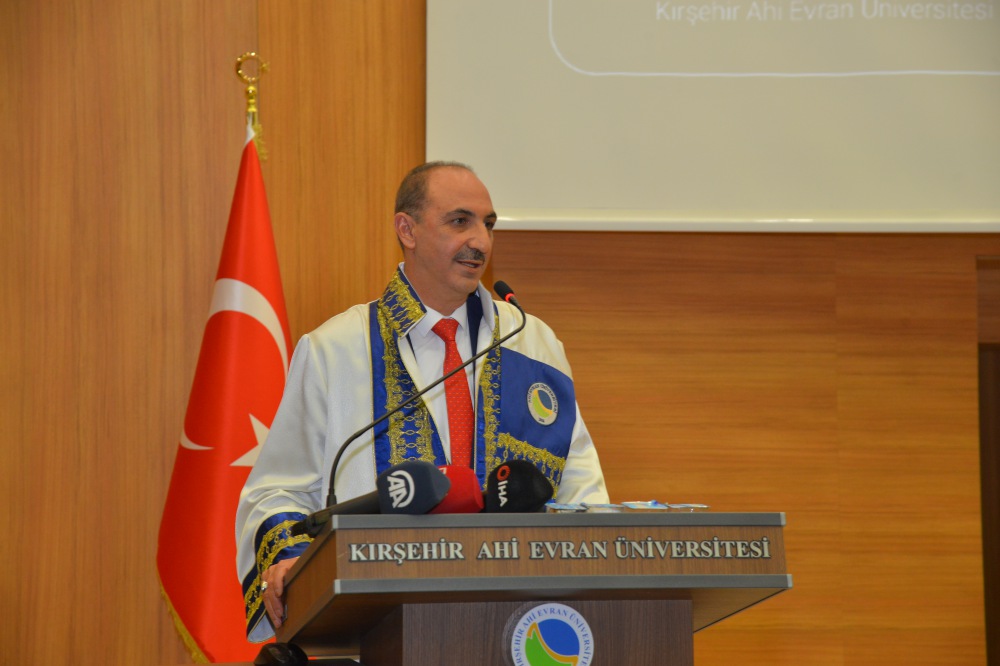 Before the speeches, the promotional video of KAEU and the video prepared by the TRNC Presidency were watched. 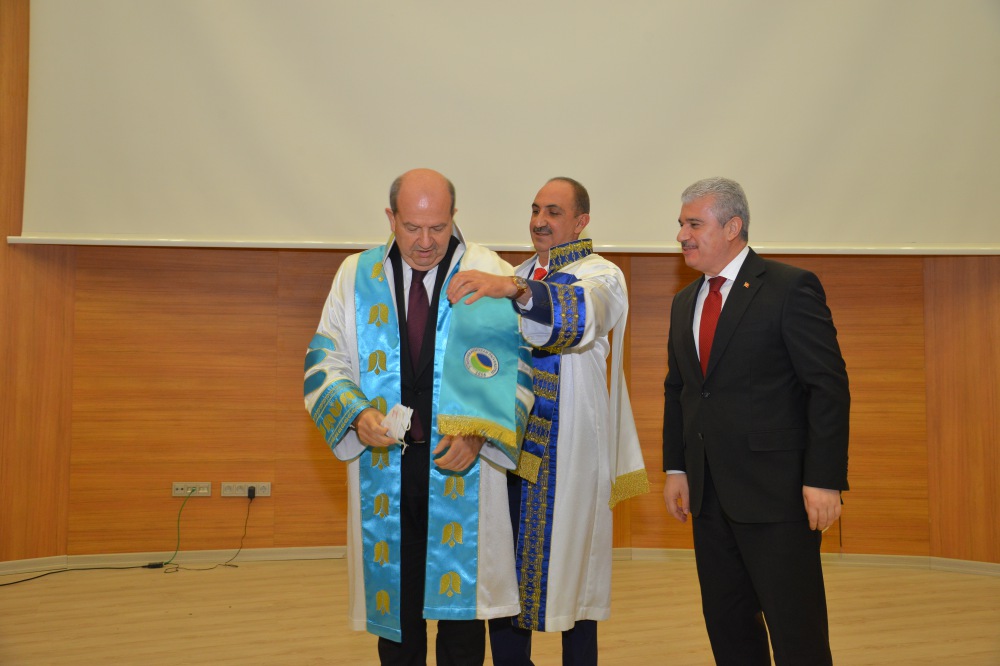 Rector of KAEU Prof. Dr. Vatan Karakaya, in his speech to the Turkish Republic of Northern Cyprus Ersin Tatar, said that President Tatar's visit to the city and the university honored them. Afterward, Rector Karakaya read the "Honorary Doctorate in International Relations" decision, which they had taken in accordance with the 14th article of the Law No. 2547, and together with Kırşehir Governor İbrahim Akın, he dressed President Tatar in his robe and presented his honorary doctorate diploma. 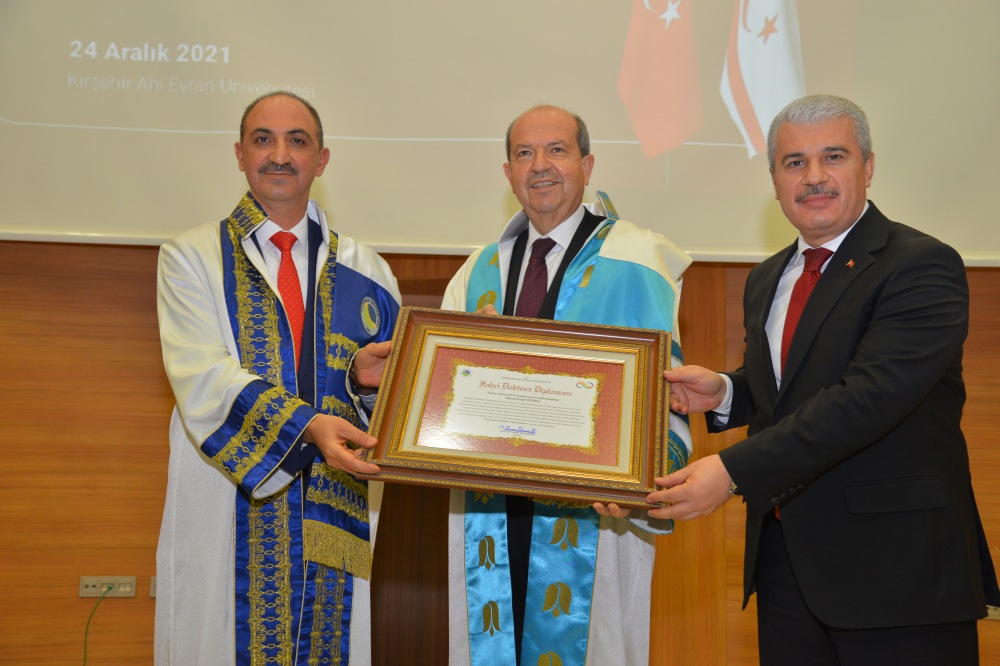 After the presentations, TRNC President Ersin Tatar, who gave a conference titled "Blue Homeland Cyprus" at the ceremony, touched upon important points.

“Cyprus is a Question of Turkishness”

Expressing that Cyprus is a matter of Turkishness, President Tatar pointed out the importance of Cyprus for the survival of the Turkish nation. President Tatar stated that Cyprus has been experiencing difficulties since the time of the British, the people migrated and went through difficult years; he said that the Turkish people had faith in Turkiye during the years of the national struggle and that they were always waiting for the day that Turkiye would come. 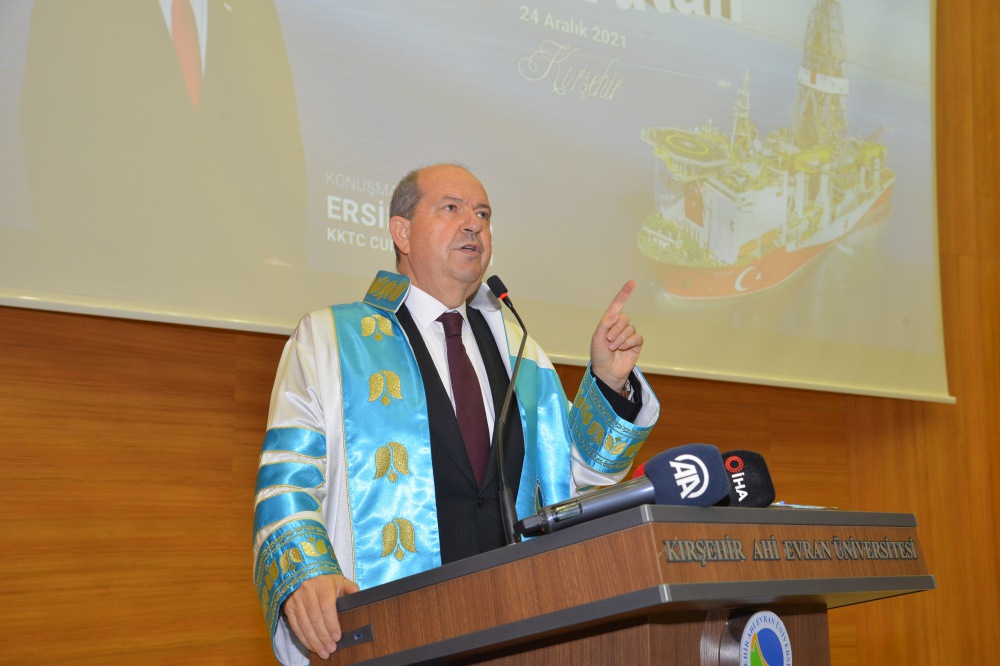 “The International Community Was Mere Spectators to The Massacres”

President Tatar explained that since that period it was accepted that there were two separate peoples in Cyprus, this was taken into account when the Republic of Cyprus was established, but the Greek Cypriots destroyed the partnership republic, the Turkish Cypriot people suffered massacres and persecution, and the international community sit back and watched. Explaining the period of the coup carried out by Greece on the island, President Tatar noted that Turkiye did not stand by, and carried out the operation and that the Turkish Republic of Northern Cyprus was established.

“Despite Isolation in All Fields, TRNC is Developing with the Support of Turkiye”

President Tatar stated that the sovereignty of the Turkish Cypriot people and the independence of the state were brought to the fore and that a new policy has been put forward at the moment; he noted that the new policy is rooted in the Turkish Cypriot people, who are an inseparable part of the Turkish world, to look to the future with confidence. President Tatar stated that the TRNC is a separate state and that it developed with the support of Turkiye despite the isolation in all areas. 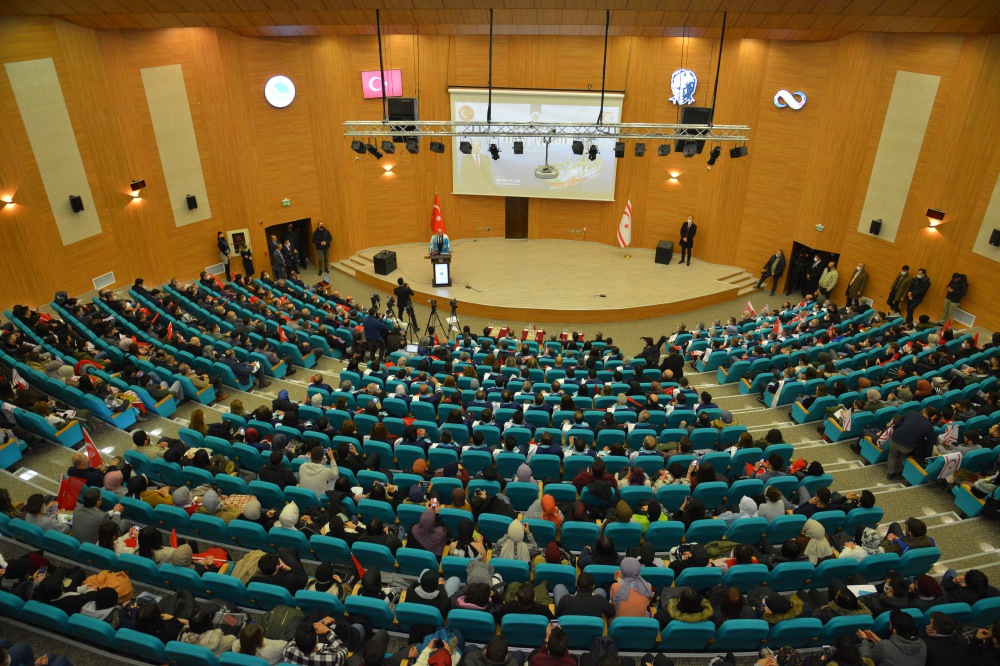 “EU Lost Its Neutrality In Cyprus”

President Tatar stated that the EU lost its neutrality in Cyprus and that although the promises made have not been fulfilled, they have always been at the table with good intentions; and he said that the struggle over Cyprus continues, international pressures continue, the majority will rule the minority based on a federation, and they will not accept a way for Turkiye to leave Cyprus.

Expressing that the new policy introduced in Cyprus should be further rooted, President Tatar said that there are two separate sovereign states in Cyprus and this has been the case for 60 years. For that reason, they will not step back in policy with the full support of Turkiye. 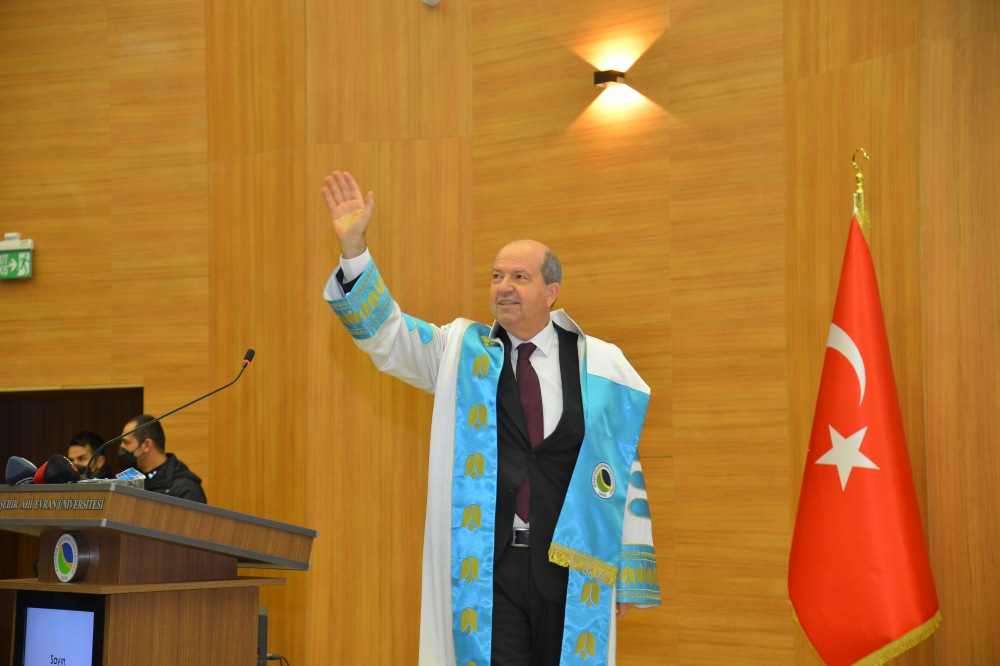 “Turkey's Status as a Guarantor Must Continue”

President Tatar pointed out that for the future of the Turkish Cypriot people to be secure, Turkiye's status as a guarantor should continue and the TRNC should be developed in all aspects. Pointing to the importance of the security, welfare, and protection of the rights of the Turkish Cypriot people, President Tatar noted that with the support of the Republic of Turkey, the TRNC will be in a much better position.

Explaining the difficult years of the Turkish people at the Blue Vatan Cyprus conference, President of the Turkish Republic of Northern Cyprus Ersin Tatar also remembered the martyrs and their souls. Noting that he was aware of the successes of Kırşehir Ahi Evran University, Tatar wished the university to continue its success in the future.

After the conference, the visit was concluded with the exchange of ideas during the visit to the rector's office. 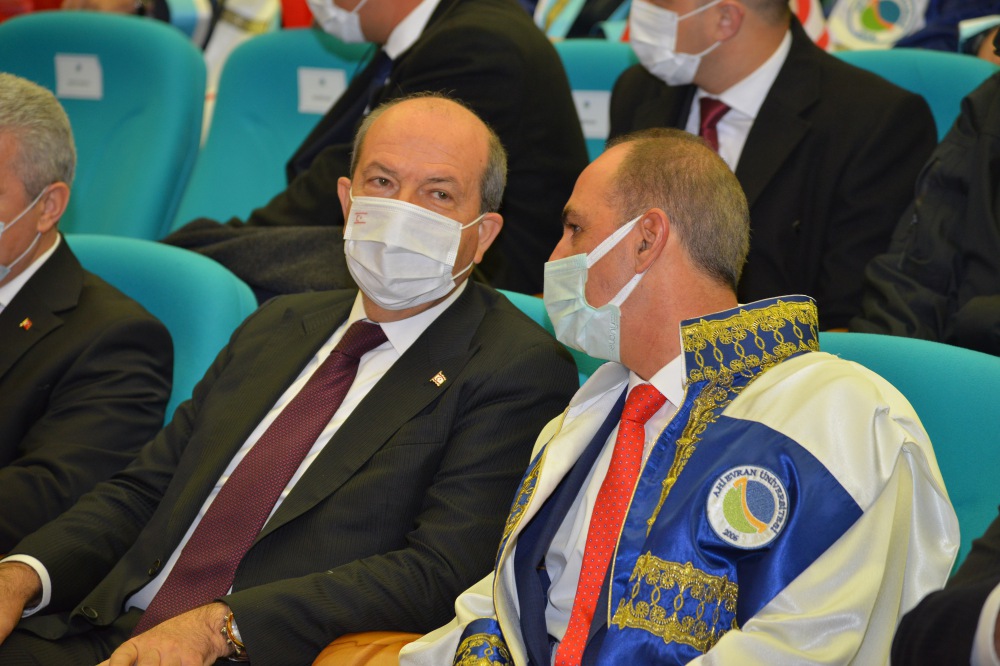 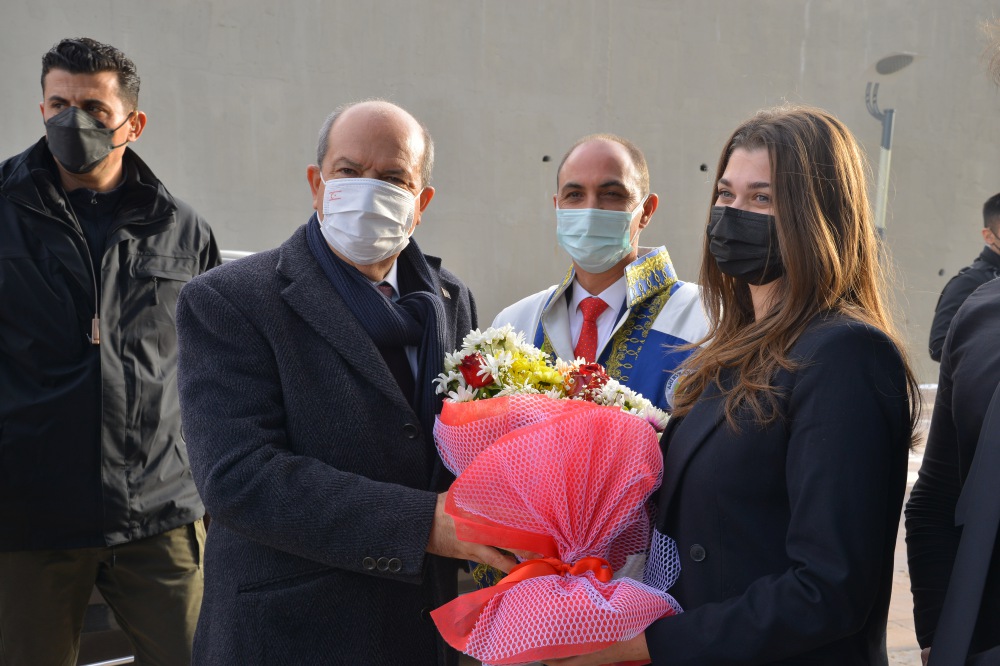